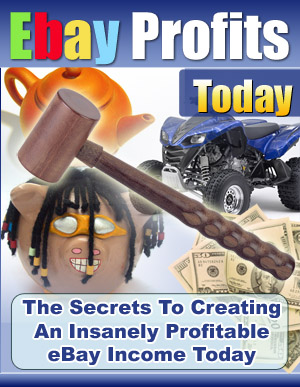 Bringing online Jeff Skoll Pierre began what has now become one of the largest online auction sites in the history of the internet, and without doubt the most successful. In today’s internet jargon ‘eBay’ is synonymous with auction … but this was not always so- as with all things new a certain amount of trial and error and growth occurred before eBay hit its stride. It really started as just an online garage sale, marketing items from their stock all lumped into categories under the somewhat boring name of “Echo Bay Technology”… when they tried to register this domain name however Omidyar discovered that it was already in use and was forced to use a derivative of the name which they decided to shorten to just ‘ebay.com’ for their website.

Things were not an immediate or clear cut success, in fact it wasn’t until 1998 that Harvard graduate and business student Meg Whitman joined and took the company public that the true growth and profitability of eBay began. Perhaps one of the hardest aspects of an online auction was the fact that like a garage sale, buyers and sellers were not assured that they could trust each other, but unlike a real-life transaction where the goods and payment could be inspected up front online auctions demanded trust.

This trust was earned over time in a manner which few if any other companies have before or sense been able to match. Besides placing rules and overseeing their growing community the eBay staff took personal interest and accountability in every aspect of the business. For instance a crash in April of 1999 that took the company down for 24 hours could have been ignored as simply the cost of doing business online, but the 400 employees of eBay at that time spent the next day calling every affected seller and explaining and apologizing for the downtime and any inconvenience.

This type of personal interaction was unheard of even at that time much less from a newly public company that was now considered by most to be at the peak of its success! This type of attention to their community and keeping interactions personal and rewarding went a long way to cementing eBay as ‘the’ online auction site.

Most histories of eBay concentrate on the public offering in September of 1998 and the subsequent purchase of Butterfield and Butterfield for 260 Million as the day eBay ‘came of age’ but in reality eBay was different and destined to success long before it went public. eBay, unlike any other online auction site before it was dedicated to ensuring successful transactions were morally based while still not limiting sales to known quantities – for instance ground breaking events such as the auctioning of a human kidney in the summer of 1999 being pulled despite bidding having reached the five million dollar point showed that this was a company that was not just in it for the money.

Of course sales like the July 2000 baseball card which went for one and half million (the highest auction for eBay at that point in time) showed that money was there for the taking as well!